skip to main | skip to sidebar

What Henry Rollins can teach us about “Character” in documentary editing.

Henry Rollins is a contradiction, the tough guy with a big heart. Watching this video this morning Henry Rollins - Man Test brought together for me a number of issues I’ve been facing in my recent documentary edits.

For the documentary editor, the way in which you reveal aspects of a subject’s personality is instrumental to their character in terms of storytelling.

I’ve recently been reading “Story” by Robert McKee - yes the writing guru from “Adaptation” who rescues Nicholas Cage’s character from a doomed screenplay.

My reason for reading “Story” was because documentary editing is very similar to screenwriting in many respects. In a documentary it is in the edit where your story structure is built, where your narrative arcs happen and where, as I mentioned, your characters are given shape. You may have a limited range of language (filmed material) at your disposal but the various possible treatments of that material can lead to anything from a shallow unengaging ramble, to a rich and meaningful world of people we love.

Henry Rollins, a picture of masculinity with his comically strong jawline, thick neck and menacing eyebrows, projects a macho attitude towards the world’s issues. He literally shouts down the position of the mainstream viewpoint. And yet, as his “Man Test” reveals Rollins scores a 73% on Femininity as opposed to a 67% Masculinity score. While this is, of course, a subjective test based on self-reflection it does outline the contradictions inherent in real people’s own minds.

Similarly, the documentary I’m editing at present centers around two characters, a brother and a sister. The brother, is ostensibly a cold and objective scientist who is outwardly hostile and resentful of his sister. However, he turns out - when push comes to shove - to have a strong compulsion to care for his sister with her various ailments, which reflects a lifetime spent caring for the sick and founding charitable organisations.

In Rollins, it’s difficult to tell which persona is True Character and which is Characterisation. While his Characterisation is clearly macho, it is clear from his upbringing that the Characterisation comes from his father, a figure that Rollins despises. He says he hates the macho attitude of “knuckle dragging” meatheads, but seems to fall so naturally into this persona in his various creative outlets. This is what makes Rollins an intriguing character, his readiness to confront his internal contradictions is refreshing and makes him an ideal documentary subject.

Human beings all have natural tendencies peculiar to them, some of which are unhealthy or contrary to what they actually want. For Rollins this is his tendency to thuggery and victimhood. He overcompensates for his feeling of victimhood by putting on a strong front physically and verbally, while he compensates for his tendency to thuggery by embracing intellectual subjects. Rather than his contradictory behaviours cancelling each other out into a bland brand of ordinary, Rollins becomes a dynamic balance of pendulum swings between the poles of his personality.

This is the reason building True Character vs Characterisation contradictions in fictional characters is so important, it makes the characters real.

So I received a reply... 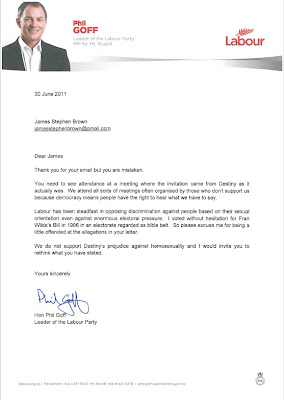 Thank you Phil for your response

Unfortunately due to your poor grammar I was unable to understand your reply completely, for example, what does the following sentence mean?

And when you said this "... democracy means people have the right to hear what we have to say" What were you referring to? Was it Shane Jones' comment that...

"based on what I've seen here... your movement will outlast me as a political player"?

Or was it his apology for the lack of religiosity in the Labour Party when he said this...

"... so don't for a minute feel, Bishop and Destiny members, that every member of the Labour Party is hostile to God."

This didn't sound to me like Labour communicating its principles, in fact it sounded more like Labour apologising for them. And no Phil, Destiny church members did not hear what Labour's views were on Destiny's policies of hate toward homosexuals because Shane Jones never mentioned them.

You see, a democracy only works if the voters can freely vote and if they have parties with clear principles they can vote for.

So Phil, you can feel free to be offended by my comments, but don't lecture me about democracy when you are the one failing to provide the clear principles you are responsible for providing in order for a democracy to work.

However, I appreciate your response,

Yours Sincerely,
James Brown
Posted by Editosaurus at 11:41 PM 0 comments

Apple has recently released FCPX: a full overhaul of the editing system on which my livelihood is dependent. Eeek.

What's more there's been a lot of yelling and screaming from “legacy” FCP users within a week of release, this, to my mind is not really enough time to tell whether a user interface is going to work effectively. There’s a panic over the loss of late edition features like multiclips and chapter markers as well as older pseudo-obsolete features like EDL (I can’t call it obsolete just yet, I just sent one off to Digipost)

The only worrying thing to me is the automated effects that pose to do colour-matching with a single click, this sounds highly amateurish to me but strangely I don’t hear anyone mentioning this.

No, what I’m looking for in a redesigned program are baseline features, like: utilization of the 64bit chip, utilization of all available RAM, background rendering, basic workflow features like background importing and file conversion with clip analysis none of which were available on FCP7 and were not even possible with its outdated architecture. Personally I like the move to forward-looking compatibility rather than back-compatibility, how many dinosaurs can a program support before it itself goes extinct. Version 1.0 (well, let's face it version 10.0 is actually a version 1.0) is about getting the architecture right, it’s not about whistles and bells (and all the bugs that come with them).

This is Apple’s model, start simple, get feedback, make improvements. Don’t try to do everything at once before you know what people want. I think I just talked myself into buying it…

So I bought it, I’ve been sitting down for an hour, and I love it. The audio controls are miles ahead of FCP7, the way they are visualized is helpful and efficient, when you raise the audio levels it actually changes the waveform (fancy that?) what’s more it shows peaking within visualization and it also has an audio compressor which a video person can actually understand rather than playing trial and error.

The flattened colour correction rectangle (as opposed to the colour wheel) is brilliant, it gives me what I’ve wanted for a long time, accurate keyboard control of colour correction rather than having to clumsily mouse a difficult to move pointer around a wheel – it also has saturation adjustments for blacks, mids and whites which was a major pitfall of FCP7′s 3-Way Colour Corrector.

And for the very small percentage of us who use the Dvorak keyboard layout, it is the first FCP that can use keyboard shortcuts in Dvorak since FCP 4.5. I think I just fell in love.

Though the magnetic timeline is new to me, I can see how it might be better than a track based timeline in many ways, but this will take longer to judge. Still don’t quite get the file management side of things but the amount of import options you have is very impressive.

I may be forced to eat my words once I actually start a proper project, but so far it’s very promising especially for a 1.0. And it hasn’t crashed yet.
Posted by Editosaurus at 2:58 PM 0 comments

In your shameless attempt to gain the votes of 9000 Destiny Church members you have lost my vote.

When you have your minister attend an event such as The Destiny Church Conference you give further authority to a hate group and cult. I saw no reporting of criticism by your minister Shane Jones of their bigoted anti-homosexuality stance nor did I see any criticism of their systematic taxing of church members in return for... nothing. So I can only assume the Labour Party was attending this rally to gain votes.

I hope you find this to be a poor strategic move. There are surely more than 9000 homo-sexual people who will be highly offended by your support of a hate group that actively targets them. Not to mention all the other people like myself who are simply interested in standing up for human rights.

I come from a family of Labour voters and have voted for Labour every election. For the first time I will be casting an invalid vote this year as a statement of no confidence. I doubt very much Helen Clark would have had one of her ministers support such a "cult" (her wording). But then again, she had principles.
Posted by Editosaurus at 2:33 PM 0 comments

So I've been curating an exhibition for the US Ambassador, and have suddenly been thrown into a crash course in contemporary New Zealand art. In doing so I've (re) discovered the work of a friend of mine. Check out his well documented works on his blog, it will no doubt blow you away as it did me.
John Ward Knox
Posted by Editosaurus at 11:11 PM 0 comments

The tradition of photo-bombing goes back to El Greco, where he would paint himself into "historical" scenes looking sarcastically at the viewer, as if to say... "This never really happened" 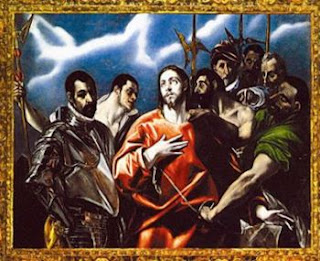 My mate Andy and I decided this was perfect for captions. 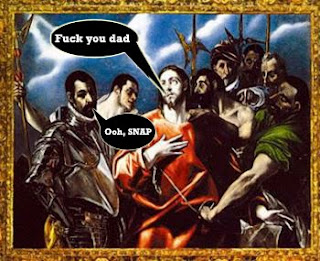 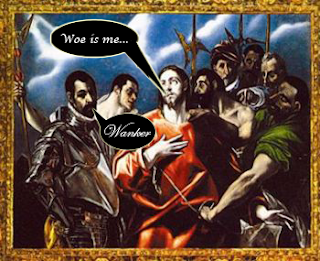 Needless to say, you may come up with your own... let's make us a meme.
Posted by Editosaurus at 8:39 PM 0 comments

In Scotland, a football referee joked about the Pope on email. He apparently passed along this image

Someone complained, the ref was fired. Sigh.

So there's a call to inundate the Scottish Catholic Office with Pope jokes. I'm doing my small part by posting. Keep the meme alive, you don't get to have someone fired for criticizing pedophile priests and those that cover up for them (The Pope)... well not, at least, without it blowing up in your face.
Posted by Editosaurus at 12:00 PM 0 comments

Where to from here?